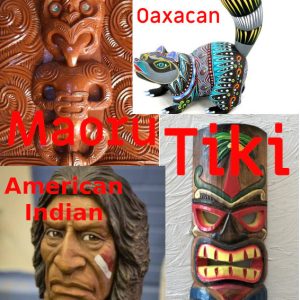 The various cultures within America make it difficult to pinpoint any particular wood-carving culture.  With exception of the Native American Indian culture wood carvings, which are widespread across America, you will find many ‘types” of wood carvings, but nothing that can establish it as a culture.  Even within various regions of the U.S.A., it is hard to establish carvings that distinguish that region’s culture.  One example of American wood carving may be found in this YouTube Video.    Other examples may be found HERE.

The Wood Carving Culture of the world tells the story of its people.  There is a world of beauty in the wood carvings of various cultures. In many cases, wood carvings identify those cultures. For example, the early Maori wood carvings of New Zealand.  Archaeologists point out that the Maori carvings have been influential in their cultural development. Being a small isolated island is what caused the Maori Art to become a rigid part of their cultural growth primarily because of their isolation.

Next, consider the wood carving of the Oaxacan people. Their woodcarvings are considered a different form of art. It draws a similar fascination for art that comes from the region of Southern Mexico. Tourists who visit Mexico usually bring home an Oaxacan wood carving. These carvings are instantly identifiable as coming out of Mexico. Bold colors and crazy designs are what distinguish these carvings from others throughout the world.

Another example is that of the Tiki. Tiki art is familiar to most and is a particular example of a culture left alone to create its own conception of beauty. To the Tiki culture, wood art is representative of the beauty of their gods. While you may not see these gods on the cover of Vogue, the art in the carvings are examples of their culture and beauty.

Let’s not forget that old saying, “Beauty is in the Eye of the Beholder”. The differences in wood carvings of different cultures indicate that we have much to learn about what we consider “Art” and “Beauty”.
This raises some questions about the more philosophical people among us who often celebrate differences between what is and is what not.  It’s all about The Wood Carving Culture of the world.

Please, add your first item to the wishlist

Free Shipping on all items to ( lower 48 United States) Dismiss